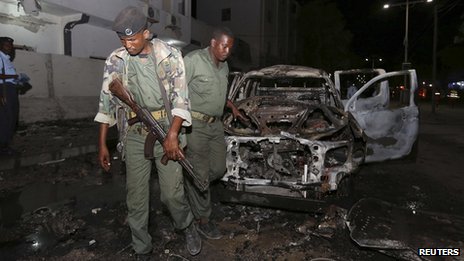 No fewer that 6 people have been killed in aSuicide attack in Somali capital Mogadishu. The attached took placeat a hotel in Somalia’s capital, Mogadishu. witnesses at the scene have reported that theycould see “several burning cars, dead and injured people on the ground” following the attack.

Islamist militant group al-Shabab was driven out of Mogadishu two years ago but often stages attacks in the city.
The BBC’s Ibrahim Mohamed Adan in Mogadishu says a loud explosion was heard in the city’s administrative centre just before 20:00 local time (17:00 GMT).

The Hotel Maka is on the Maka Mukaramah road which links the presidential palace to the airport, one of the most heavily guarded areas of Mogadishu.

It is popular with members of parliament and other officials. One report stated that a senior Somali diplomat was among the dead.

Eze Chucks is an experienced media practitioner. He has worked for several news organisation.He has pioneered many online news website as an editor . He holds a B.Sc Economics degree and a masters degree email:editor@compassnewspaper.com.ng
Previous Nigeria won Under-17 World Cup
Next Nigerian Killed in Goa,Indian over ‘racial profiling’