The New Peoples Democratic Party (nPDP) has challenged the Federal Government to account for the $5 billion which has allegedly disappeared from the nation’s Excess Crude Account (ECA).

The party threw the challenge after a careful study of the disclosure made by the Chairman, Nigeria Governors’ Forum (NGF), Rt. Hon. Chibuike Rotimi Amaechi, while declaring open the second annual retreat of the NGF on 15th November, 2013 in Sokoto.

According to Governor Amaechi, the Excess Crude Account stood at $9 billion last January but has shrunk to only $4 billion as at today.

We consider this development too weighty to be swept under the carpet in view of the stature of the person making the allegation and the realities on ground. For all intents and purposes, Gov. Amaechi is not a frivolous person and is not known for making frivolous claims. We told Nigerians about the poor handling of our common patrimony by this administration and sadly nobody took seriously as today, the unmistakable evidence is that Nigeria is broke as the Federal Government now finds it difficult to meet its obligations to states, local governments and contractors.

We wish to commend the NGF Chairman for bringing this matter to the open and hereby challenge the Federal Government to come to tell Nigerians what it did with the money. We also hereby challenge the anti-graft agencies to prove their relevance by unearthing the whereabouts of this huge sum of money.

We heartily congratulate the NGF for a successful retreat and fully support its call for transparency in the operations of the Nigerian National Petroleum Corporation (NNPC) and the need to develop a National Security Framework for the country.

That this administration is running for a price award as the most corrupt administration in the annals of governance in Nigeria is not in doubt but we urge Nigerians to heed the advice of the NGF and stop being docile in the face of monumental impunity in the country. This, in reality, is the only way to rescue Nigeria from the path of doom.

Chief Eze Chukwuemeka Eze is a Media Consultant based in Port Harcourt and he is the National Publicity Secretary, PDP.He was a member of the Presidential Campaign Team of Alh. Atiku Abubakar/Senator Ben Obi in 2007 and a member of the Media Team of the Re-Election bid of Gov. Amaechi in 2011. Eze has authored and published countless articles towards promoting democracy in Nigeria. He loves writing and has authored a book, Prince Tonye TJT Princewill: The Prince of Niger Delta Politics – His Vision, Mission and Politics. Some of his unpublished works include the book, The Man Atiku Abubakar: From Obscurity to Limelight and Amaechi, His Strides and Politics.
Previous BETTER PROCESSES HAVE REDUCED SUBSIDY PAYMENTS TO MARKETERS… ONLY VERIFIED CLAIMS FROM CERTIFIED MARKETERS ARE PAID
Next Transcorp is delivering on promise to give Nigerians access to country’s growth potential 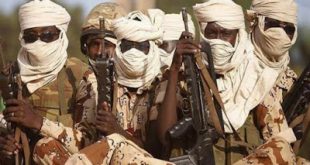